Heritage Objects and Their Story – XI 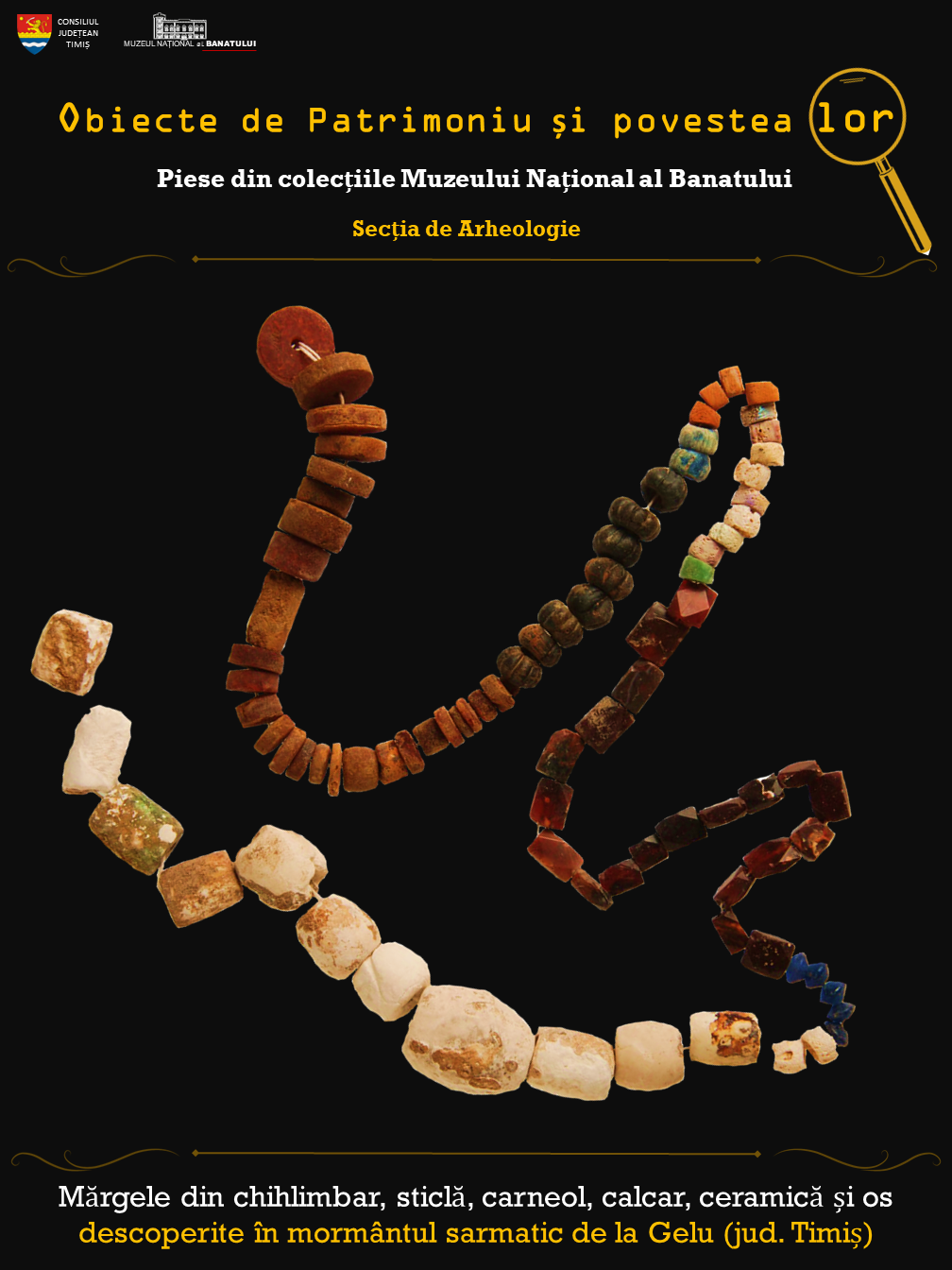 Duration of the event

Beads made of amber, glass, carnelian, limestone, pottery and bone, discovered in the Sarmatian tomb at Gelu (Timiș County)

Since prehistoric times, the decoration of the body with various objects has played an important role in the manifestation of cultural identity, jewelry being worn to mark a certain social status or as amulets. Archaeological discoveries have shaped an image of accessories and their role not very different from today. The main differences are the accessibility of materials in the context of today’s infrastructure, as well as the symbolic significance of the past, when the protective power of amulets mattered more, some with magical inscriptions or special meanings manifested by shapes, materials and colors.

In the Sarmatian tombs are often found beads that are supposed to have been sewn on various clothing items, representing a trend spread throughout the existence of this migratory people.

In 1972, a Sarmatian tomb belonging to a woman was discovered in the commune of Gelu in Timiș County. It was researched by the Banat archaeologist Florin Medeleț, who discovered in the funeral inventory 96 beads deposited in the thoracic area of ​​the skeleton.

The beads discovered are of different shapes, colors and sizes, as well as made of various materials. Among them are 31 amber beads, one of which is tubular and the rest are cylindrical. The 28 glass beads have various shapes (flower, cylindrical, parallelepiped and biconical) and different colors (translucent, white, blue, green, orange or ocher). Another 20 beads were made of carnelian, having the shape of a dark red prism, and 11 tubular beads made of limestone kept the white color of the material. 4 parallel beads made of reddish ceramic and a parallel bead made of yellowish bone were also discovered.

Among the beads discovered, the attention of archaeologists was particularly attracted by the presence of a larger number of amber beads, which were usually present in a smaller percentage in the funerary deposits researched so far. This type of beads appeared in the Carpathian basin from the 2nd to the 5th century, but on the current territory of Banat they are found only in the late period of antiquity (last third of the 3rd century – beginning of the century). IV). Amber beads are considered to be evidence of trade between Sarmatians and northern communities.