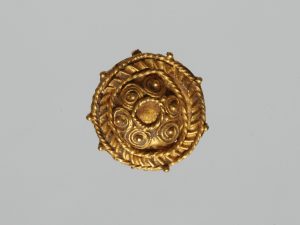 Gold appliqué from the Pongrácz collection

The Roman period collection includes pieces relevant to the provincial Roman civilization in this area of ​​Europe. Especially at the beginning of the museum, various collectors donated or donated Roman artifacts for purchase. Thus, the Pongrácz collection includes ornaments, brooches, vessels, etc. gathered mainly from the Danube area (Clisură). The best represented, however, is the period of existence of the province of Dacia, when the Roman military and settlers established camps and settlements in the eastern part of Banat. The most important Roman site in Banat remains Tibiscum (Jupa, Caraş-Severin County), a strong military center in connection with which a city that reaches the rank of municipium is developing. Most of the Roman objects in the collection come from the systematic archeological research here (started in 1964). 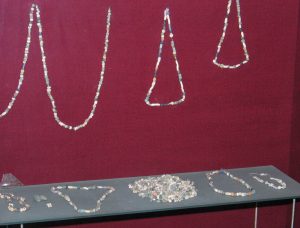 Glass beads from the glassworks, Tibiscum

The Roman army is thus present with: pieces of armament, military equipment, tiles or bricks (some stamped with the logo of the military unit), epigraphic monuments, tools, etc. Large amounts of pottery were produced and used in the civil camps or settlements, from the archeological excavations coming many ceramic objects that were restored: amphorae, pots, jugs, bowls, lampshades, etc. Some of the vessels were produced in prestigious centers in other parts of the empire; It is worth mentioning here the luxury pottery called terra sigillata, well represented in our museum. However, the craftsmen from Roman Dacia provided most of the inventory necessary for the life of the inhabitants, a situation that emerges from the inventory of archeological goods, where we find pieces of iron, bronze, glass, etc., with specialized workshops. It is interesting the glassworks workshop (archaeological research) from Tibiscum, focused primarily on the production of glass beads, these being highly appreciated by the population of the Banat plain. Most likely, the Banat Museum has the largest collection of glass beads in the territory of the former Dacia province. 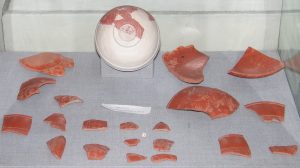 Fragments of vase terra sigillata of the Tibiscum

Roman artifacts or monuments have been discovered, through systematic or fortuitous research, in other sites of Banat: Berzovia, Orsova, Pojejena, Mehadia, Sânnicolau Mare or Cenad. Other exhibits in the museum come from very rich Roman sites in the vicinity of Banat: Colonia Dacica Sarmizegetusa and Drobeta.

The Banat plain, although not colonized by the Romans, has provided valuable archeological pieces especially through recent research. We can mention: the inventory of a Sarmatian princely tomb (1st century AD), with gold ornaments, discovered at Sânnicolau Mare; buckles and silver sconces (2nd-3rd century AD) discovered at Foeni. 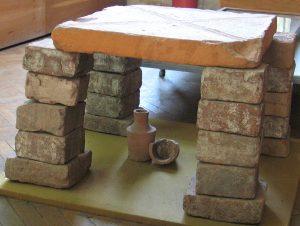 The lapidary of the Banat Museum

In 1873, the Society of History and Archeology of Timisoara was offered by General Anton Scudier several Roman and medieval monuments from Titel (a town on the right bank of the Tisza, today in Serbia). This important donation, which contained 16 epigraphic and sculptural pieces from Lower Pannonia, represents the beginnings of the Timişoara lapidary. Over time, it has been considerably enriched by a large number of monuments in the province of Dacia, almost all of them being brought from the Roman sites of Banat. It is worth mentioning the efforts of the archaeologist Marius Moga, who initiated systematic research in Tibiscum (Jupa, Caraş-Severin County) in 1964, the site where most of the pieces in the lapidary come from. To these are added inscriptions or other stone monuments discovered at Pojejena, Mehadia, Orşova, Slatina-Timiş, Sânnicolau Mare or Cenad. Also, three very important inscriptions for the history of the province of Dacia come from the Dacian Colony Sarmizegetusa. 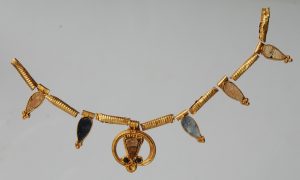 Gold necklace from a Sarmatian tomb from Sânnicolau Mare

The Roman monuments – honorary, votive, funerary – were exhibited in the hall on the ground floor of the museum building (Huniade Castle). For museum reasons, several niches have been arranged in the walls of the corridor in which small epigraphic material is presented – fragments of inscriptions and stamped Roman bricks. A few medieval architectural fragments complete the picture of the collection of stone monuments of the Banat Museum. 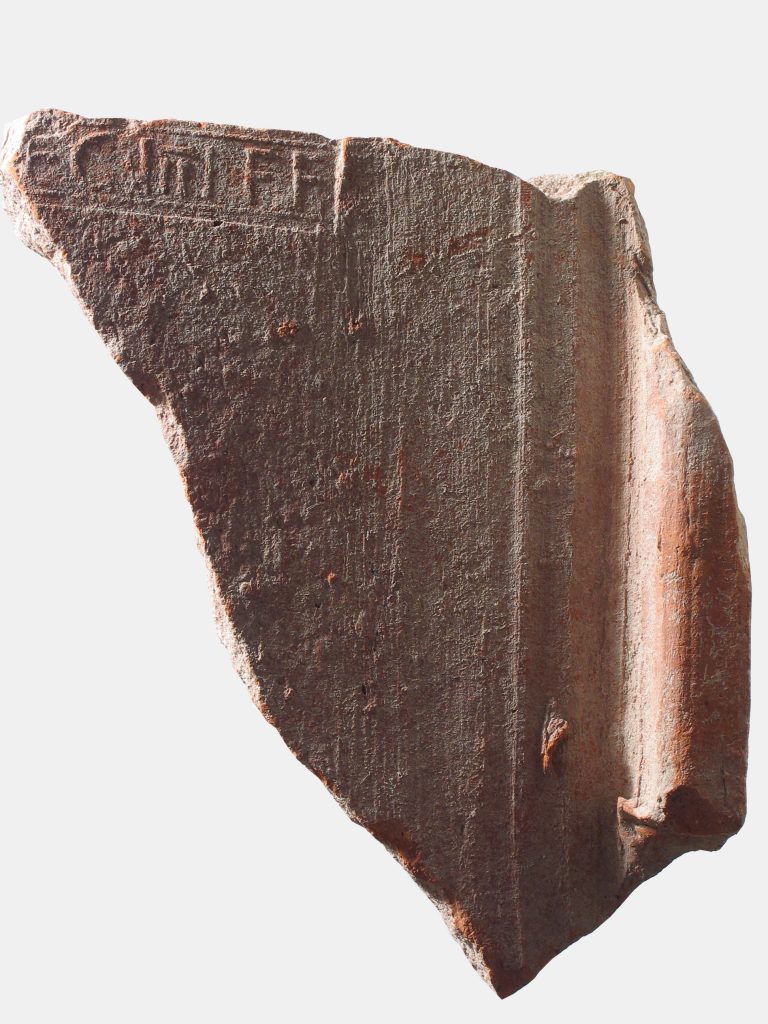 Tile with the stamp of the legion IIII Flavia Felix, Berzovia

Capitoline magnifying glass on a monument in Lower Pannonia (Titel). 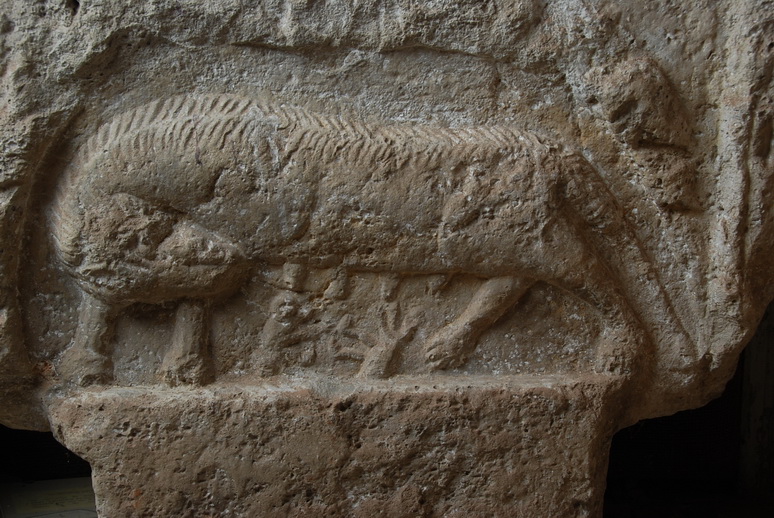 Monument with votive inscription from Tibiscum 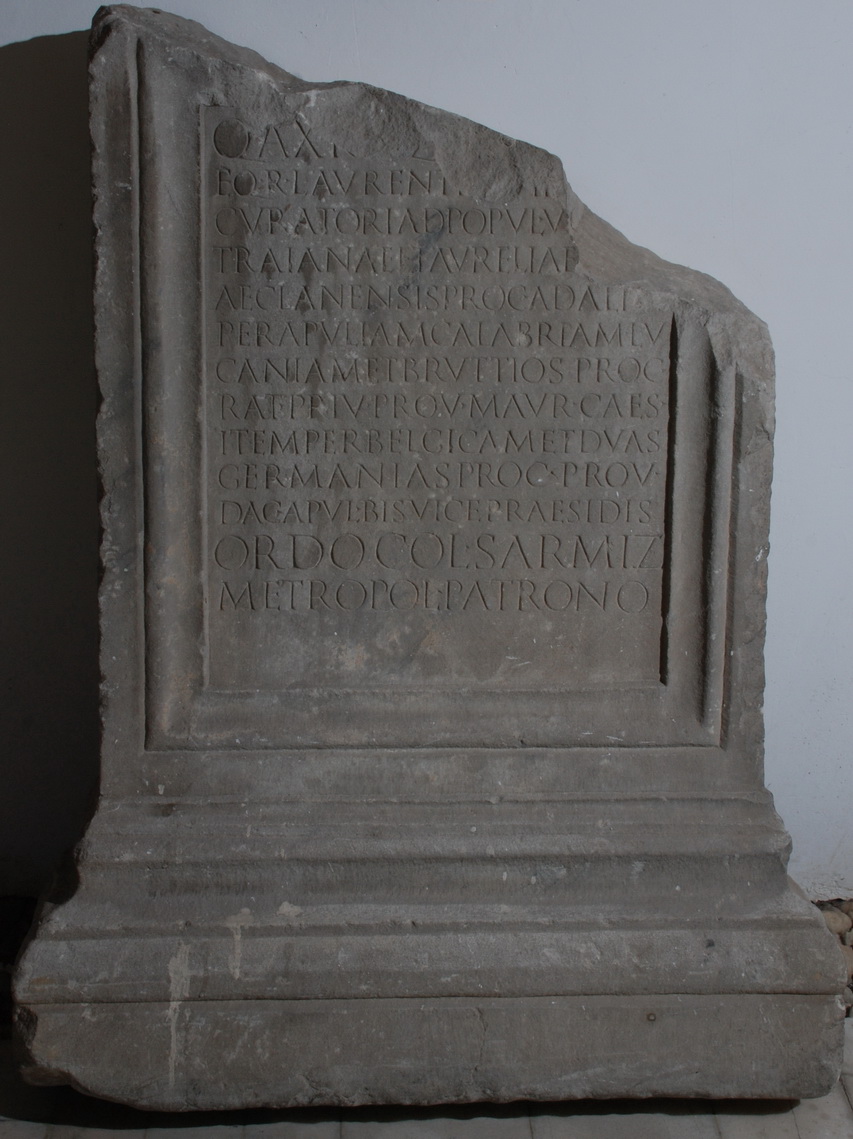 Honorary inscription of a statue, from the Dacian Colony Sarmizegetusa